There was a time last summer when I got particularly bored and thought that maybe I should do something crazy.  Two weeks later I was on a plane headed from Chicago to London, where I would have a connecting flight to my final destination, Prague.

After living in the Czech Republic for some time there has obviously been many surprises in store. You expect this any time you move to a new country. There’s a language barrier.  People look different.  Day-to-day interactions in supermarkets, restaurants, office places, etc are all different, but that is to be expected.

One thing I did not expect, however, was to see the most incredibly well-behaved dogs in the world.  People in America love dogs, don’t get me wrong, but here, dogs behave better than 90% of people I know.  The first time I visited Albert, the local supermarket, I saw a dog sitting outside the front door.  It wasn’t tied to anything.  It wasn’t a stray dog.  It was waiting.  The doors were automatic sliding doors, and every time someone walked in and out the door, the dog would continue waiting patiently for his owner.  When the owner finally exited, the dog joined them and they continued on their way as if it was their normal routine.

This was just the first day.  Since then I’ve also seen people take their dogs into restaurants, and the restaurant brings the dog water for free, even when humans have to pay for water.  In short, if you love dogs, you’ll love the Czech Republic.

This has been just one goofy example, but in general, I have been shocked by the quality of life that is available in a country much cheaper than what I’m used to.  After having lived here for almost 9 months now, I can safely say it’s the best decision I could have made.

Ah yes the dogs! This was a great and most true observation of the city. Prague may not be quite as multicultural as other European cities, but I believe I have seen an example of most every known breed of dog, large and lap, walking around the city. 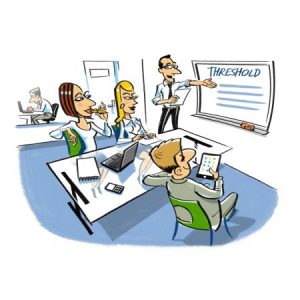